Ever think about how world events on planets that are millions of miles away are captured? FLIR did and they're here to explain how they did it.

On February 18th, NASA successfully landed the Perseverance Rover on Mars. This isn’t the first Mars mission, but it was the first time that the entry, descent, and landing of a spacecraft was filmed and broadcasted live for the public to watch and virtually participate.

Six FLIR machine vision cameras captured the event from multiple angles, documenting all stages of the thrilling touchdown. Whilst only a few minutes long, the footage has already helped engineers evaluate how well their work performed in space, and inspired millions of viewers around the world. Here, FLIR walks you through how they captured NASA’s rover landing on Mars for the world to watch via the power of machine vision.

The Entry, Descent, and Landing (EDL) of the rover may only be a few minutes long, but there’s a lot going on in those few minutes. After entering the Martian atmosphere, the parachute deploys about 7 miles (11 kilometres) from the surface. Just before this point, three up-looking cameras began recording, capturing footage of the supersonic deployment of the most massive parachute ever sent to space: 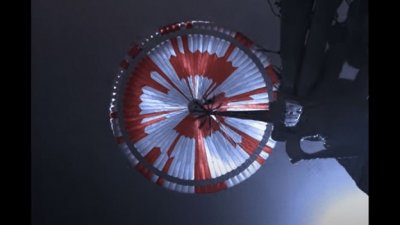 Five miles off the ground, the heat shield (used to protect the rover during entry into the Martian atmosphere) drops off and exposes the rover down-look camera, showing some of the rover’s intense ride to Mars’ Jezero Crater: 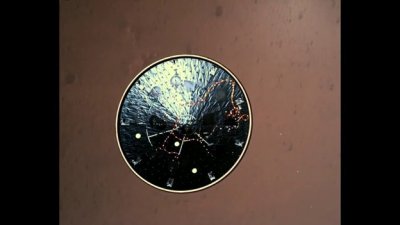 Then the rover drops away from the back shell (and parachute). From there, its descent is managed by a rocket-powered descent stage called the “SkyCrane”. Here’s a view of the rover captured by a down-looking camera on the SkyCrane: 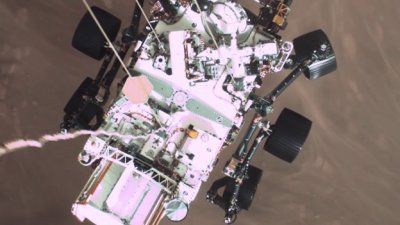 Then it’s touchdown! Here’s a view (from a camera on the rover) of the SkyCrane being swept away as the rover touches down on the surface of Mars to begin its mission: 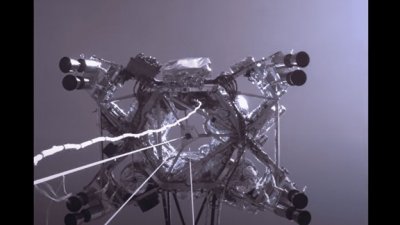 The cameras that captured this footage are FLIR RGB machine vision cameras and include five 1.3-megapixel cameras and one 3.1-megapixel USB camera. “Our cameras are designed for operation on Earth, and not built to operate in outer space”, said Sadiq Panjwani, VP of the Integrated Imaging Solutions (IIS) division at FLIR. “So we were quite thrilled that NASA put them to the test”.

NASA began contacting FLIR in 2015 to investigate suitable cameras for the EDL (Entry, Descent Landing) system. Engineers were looking for commercial off-the-shelf (COTS) hardware with an emphasis on low cost and ease of system integration.

This is the first time that FLIR machine vision cameras have been subjected to the extreme temperatures or high gravity forces experienced during the Mars landing. Everyone involved in the engineering and manufacture of cameras at FLIR is thrilled about this testament to their durability and performance. And of course, ecstatic to say that their work has made it to Mars!

Congratulations to the team at NASA and everyone involved in making this historic milestone a reality. You can watch the official video released by NASA of the descent and touchdown here.

Founded in 1978, FLIR Systems is a world-leading industrial technology company focused on intelligent sensing solutions for defence, industrial, and commercial applications. FLIR Systems’ vision is to be “The World’s Sixth Sense”, creating technologies to help professionals make more informed decisions that save lives and livelihoods.

You can find more information about how FLIR captured NASA’s rover landing on Mars on its website or by following them @flir.

VISION Stuttgart: An Interview With Basler

BrainBox AI Raises $24m in Series A Funding Round


Warning: array_sum() expects parameter 1 to be array, null given in /home/customer/www/mvpromedia.com/public_html/wp-content/plugins/jnews-social-share/class.jnews-social-background-process.php on line 112

This policy explains how IFA Magazine collects, stores use, and shares personal information (including but not limited to information from which you can be personally identified such as your name, address, job title, company, email address, or telephone number) and information about your visits to the network, including the pages you view, the links you click and other actions taken in connection with www.ifamagazine.com, www.gbinvestments.co.uk, www.robopromedia.com, www.mvpromedia.com.